Bitcoin Soars Above $21K As Investors Ask If Bottom Is In

Bitcoin Soars Above $21K As Investors Ask If Bottom Is In It has been a bright start to the year for bitcoin. After remaining uncharacteristically stable for the first week of 2023, the price of bitcoin has now exploded higher.

After steadily increasing during the first half of last week, the world’s largest cryptocurrency then accelerated as the latest CPI figures revealed that inflation has continued to cool.

Trading on both the spot market and derivative markets increased significantly causing many to begin questioning if the bottom of the market is now in.

Elsewhere, Ethereum developers confirmed that staked ETH withdrawals are still on track for March and Litecoin’s block halving is now less than 200 days away.

Bitcoin rallies above $21,000 for the first time in 2 months

It was almost a perfect week for bitcoin as the world’s leading cryptocurrency tore skywards for the first time in over 8 weeks.

The move was strong enough to cause crypto traders and investors to question if the worst of the bear market is now over.

Bitcoin pushed steadily higher every day last week and climbed out of the tight range it had been trading within. The coin had been trapped between $16,000 and $17,500 since the collapse of FTX in November.

But, last week’s push higher has now placed bitcoin back at levels not seen for over 2 months. The coin closed out the week above $21,000 and locked in a weekly increase of 22%.

Excitement regarding a potentially brighter 2023 was shared across the entire altcoin market with Ethereum and XRP also enjoying increases of 20% and 12% respectively.

Promising CPI results helped bitcoin on its way last week and allowed the coin to overcome a strong technical level of resistance at $19,000.

CPI data revealed that inflation had continued to cool throughout December, which is a metric that the Federal Reserve wants to see before it can ease monetary tightening. Frequent interest rate hikes from the Fed have lessened the appetite for risk-on assets such as crypto. However, that trend may be starting to change.

Increased risk appetite was witnessed within the derivatives market, which experts believe was helping to underpin the higher spot prices.

According to Crypto Quant’s CEO, Ki Young, on Saturday morning over $4 billion worth of bitcoin futures were purchased – a scale of orders not witnessed for several months. $87 million worth of short positions were also liquidated.

The mining difficulty of bitcoin – which determines how hard bitcoin miners must work to solve Bitcoin’s mining algorithm and add new blocks to the blockchain – had fallen throughout December.

However, experts were expecting a significant increase throughout January due to Bitcoin’s hashrate reaching new all-time high levels only a week ago.

However, to ensure that blocks are added at consistent 10-minute intervals, Bitcoin’s mining difficulty readjusts every 2 weeks.

Bitcoin miners have been under increasing pressure over the last 2 months as the costs for Bitcoin mining have increased while the price of bitcoin has fallen.

The recent boost in bitcoin prices will now help to relieve some of their concerns.

According to data collected by macromicro.me, the average cost per Bitcoin mining unit currently stands at $17,377. Meanwhile, the cost per bitcoin stands at $21,175.

During an interview with Decrypt, Ethereum core developers confirmed this week that everything is on track for the Shanghai upgrade in March – an upgrade that will enable staked ETH withdrawals.

After the Ethereum blockchain transitioned to Proof-of-Stake, those staking ETH have been earning newly minted ETH from every new block that is added.

However, ETH stakers can still not withdraw coins from the staking contract. A contract that currently contains $22.7 billion.

The wallet was permanently locked to allow for a smooth transition period from PoW to PoS. But, new withdrawal capabilities will come with the Shanghai upgrade.

In preparation, a ‘devnet 2’ developer network was launched last week so that developers could become familiar with the ETH withdrawal process and ensure that everything works correctly.

Other updates, such as proto-danksharing and an upgrade to the Ethereum Virtual Machine have all been put on hold until staked ETH withdrawals have been completed.

Some experts predict that the introduction of flexible ETH staking will add confidence to the process and, therefore, encourage even more ETH holders to stake their coins. 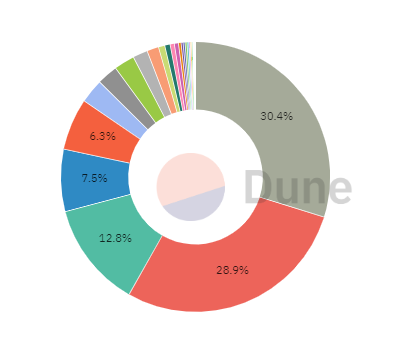 Litecoin, the 14th largest cryptocurrency by market capitalisation, is now just 193 days away from its next halving event.

Like Bitcoin, approximately every 4 years, Litecoin’s mining algorithm implements a halving event that halves the rewards for each new block. This is set to take place at a block height of 2,520,000.

Based on the current block rate, experts believe that the next halving event will take place on or very close to 29th July 2023. A date that is now less than 200 days away.

At that time, Litecoin’s block rewards will halve from 12.5 LTC to 6.25 BTC, which will result in a reduction in supply.

As halving events reduce the supply that enters circulation, these events are watched closely by cryptocurrency investors.

Litecoin will be one of the only major Proof-of-Work blockchains to experience a halving in 2023. Bitcoin Cash is still 357 days away and Bitcoin is still 404 days away.

With anticipation surrounding the Litcoin event building, the price of LTC has increased 22% from the start of the year and is up 65% from October 2022 lows.