Could Ethereum become a deflationary cryptocurrency? We’ve taken a look at the asset’s current issuance and burn rate to assess what its future may hold.

Ethereum’s highly-anticipated transition to its new phase as Ethereum 2.0 is expected to deliver a few long-awaited upgrades to the Ether ecosystem. A key question on everyone’s minds is: “does the transition to Ethereum 2.0 mean Ethereum is becoming a deflationary asset?”.

In this article, we’ll explain what a deflationary cryptocurrency is, exactly what the Ethereum 2.0 upgrade is expected to bring, and whether Ethereum is truly on the road to hitting deflationary status.

What is a deflationary cryptocurrency?

For a cryptocurrency to be considered deflationary, it needs to have a decreasing coin supply. The idea is that as the circulating supply of that cryptocurrency reduces over time, each of the remaining coins become more valuable because the asset is scarcer.

This contrasts to many cryptocurrencies which are inflationary, similarly to fiat currency, and either have high supply caps or no cap on their supply at all. As a result, as more of the asset is created, its value decreases.

There are two main characteristics that deflationary cryptocurrencies typically have. Firstly, they usually have a predetermined, unchangeable maximum supply that’s implemented into their code. The most famous example of this is Bitcoin’s 21 million BTC supply cap which was set by its eponymous creator Satoshi Nakamoto. Bitcoin’s supply is currently at the 19 million mark and will grow slowly until it hits the 21 million mark in around the year 2140.

The two biggest cryptocurrencies, Bitcoin and Ethereum, are both tipped to become deflationary in the future, but for two entirely different reasons.

Bitcoin has a fixed, maximum supply, and it’s estimated that the asset’s final block will be mined in 2140. Around 20% of Bitcoin’s current minted supply (19,008,012.00 BTC) has been lost due to forgotten passwords and forgotten keys, and that number increases every year. It’s projected that Bitcoin may officially become deflationary once its full supply has been minted, as the circulating supply will continue to reduce due to holders’ unintentional losses.

On the other hand, Ethereum doesn’t have a maximum supply but its annual supply is capped at 18 million ETH. For Ethereum to become deflationary, 2 ETH would need to be burned per block; this is because this amount is minted for each block that is mined.

Ethereum 2.0 and ‘The Ethereum Merge’

It’s expected that Ethereum could become deflationary after ‘The Merge’, which is the ominous name for the event during which Ethereum’s current mainnet will merge with its Ethereum 2.0 Beacon Chain, marking the network’s transition from a proof-of-work model to proof-of-stake.

When is the merge for Ethereum expected to happen?

An exact date hasn’t been given for this yet, but developers expect that it will happen towards the end of 2022.

What benefits will the merge bring?

Ethereum’s network upgrade will bring several benefits, including reducing its environmental impact by moving away from mining, and increasing the security of the blockchain. Investors also anticipate that fewer coins will be issued as a result of Ethereum 2.0, meaning that scarcity will increase and potentially, so will Ethereum’s price.

It’s estimated that transitioning to proof-of-stake will reduce Ethereum’s issuance rate by 90%, and if its burn rate remains the same, Ether’s supply may reduce by as much as 5% per year. The first stage of the merge was the Ethereum Improvement Proposal (EIP-1559) upgrade, which has already created a bullish case for Ethereum becoming a deflationary asset in the future. 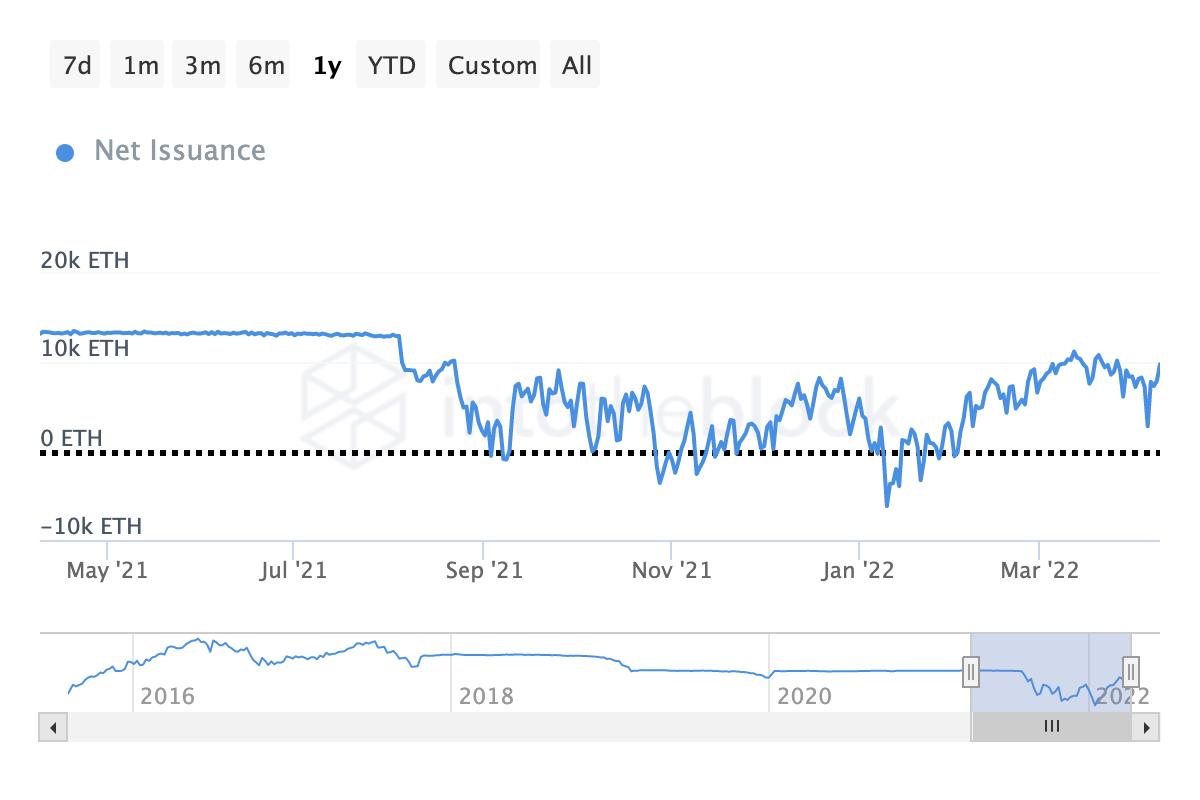 The implementation of EIP-1559 was part of the London hard fork which happened on 5 August 2021 at block 12,965,000. It was the biggest upgrade to Ethereum’s network to date because it introduced a new fee structure and burning mechanism.

Following the upgrade, Etheruem’s gas fees started including a base fee in addition to the priority fee. The priority fee is an optional fee that you can pay to incentivise miners to include your transaction in the next block, while the base fee is a minimum fee that you have to pay for your transaction to be included in a block. In the previous model, all the fees went directly to miners, but the new base fees are automatically burned once a transaction is successfully completed.

Introducing fee burning has had a significant impact on Ethereum’s price, as well as its circulating supply. Since priority fees are optional, base fees make up the majority of Ether fees that are paid on the network, meaning that most of Ethereum’s fees are now destroyed.

According to Watch The Burn, 2,100,020 ETH has been burned since the upgrade, worth $6.93 billion, while 3,343,714 ETH has been created, leaving a net issuance of 1,243,694 ETH. NFT trading has accounted for the majority of Ethereum transactions as of late, and as the biggest NFT platform, activity on OpenSea alone is responsible for the bulk of Ether that has been taken out of circulation.

What’s more significant is that thanks to the introduction of token burning, Ethereum posted its first-ever deflationary week between 11 January and 18 January, though that hasn’t yet become a consistent trend. During that week, 5,910 more ETH was burned than created, resulting in a successive week of deflationary issuance, taking Ethereum’s rate of inflation below Bitcoin’s for the first time.

For the first time in its history, Ethereum’s inflation rate fell significantly below Bitcoin’s in January 2022 (Source: Charles Edwards Twitter/Glassnode).

As discussed, approximately 2 ETH would need to be burned per block to make Ethereum deflationary, but as of April 2022, less than 1.5 ETH had been burned per block on average. Ethereum is unlikely to become deflationary under this upgrade alone, however, Bankless has projected that its net inflation rate will settle between 1.26% and 2.66% before the Ethereum 2.0 release. This would be a significant decrease from its 4% annual inflation rate in 2021, and brings it toe-to-toe with Bitcoin, whose rate is currently 1.77%.

It’s fair to say that EIP-1559 has played a pivotal role in reducing Ethereum’s supply and slowing down the issuance of new tokens, which is promising in advance of the full Beacon Chain integration later this year.

The ultimate question for most investors is whether these upgrades will lead to an increase in Ethereum’s price. As always, there’s no way to know for sure, but the sentiment amongst Ethereum’s most prominent investors suggests that the move towards Ethereum 2.0 network will have a positive effect all-round, both for its price and long-term value.

Bitcoin has been widely accepted as an anti-inflationary digital asset that holds value in the same way as gold, thanks to its scarcity. The prospect of Ethereum operating similar tokenomics would position it as a similarly valuable asset, especially since most cryptocurrencies are still inflationary. That, paired with its stronghold within the NFT and decentralized app space, suggests there is a lot of positive momentum for Ethereum still to come in 2022.

The Ultimate Guide to Bitcoin 2022