Ethereum Staking Will Reduce Energy Use by More Than 99% As criticisms of energy inefficiency continue to plague the cryptocurrency market, the Ethereum Foundation has announced that the world’s second-largest crypto will be moving from mining to staking in the coming months, a transition that will reduce Ethereum’s energy consumption by more than 99%.

The cryptocurrency market nosedived on Wednesday 12th May after Elon Musk announced that Tesla will no longer accept Bitcoin as a payment method, citing concerns over increasing fossil fuel usage in the digital currency’s mining and transaction processes. Unsurprisingly, the news sent waves through the market, prompting many to reconsider the environmental impact of Bitcoin.

Ethereum has taken centre stage after revealing estimates that its upcoming migration to proof-of-stake will reduce the blockchain’s power consumption by 99.95%, according to a blog posted by Carl Beekhuizen of the Ethereum Foundation.

A major part of the Ethereum 2.0 upgrades is the addition of the new Beacon Chain which introduced staking to the network, in an effort to reduce energy inefficiency. The objective is that Ethereum’s mainnet will eventually merge with Beacon Chain, enabling network-wide staking and marking the end of the current mining system. In the blog post, Beekhuizen outlined how ‘The Merge’ will significantly reduce the network’s energy usage.

It’s estimated that there are approximately 87,000 validators staking at home using roughly 100W of power, meaning that at home-stakers use about 1.64 megawatts in total. Then there’s custodial stakers who, based on what Beekhuizen considers to be an overestimation, use roughly 100W per 5.5 validators, totalling to 0.98 megawatts of energy.

With these estimates combined, Beekhuizen says that Ethereum’s energy consumption will be 2.62 megawatts post-merge. This massive reduction in energy use will take Ethereum from requiring a country’s worth of power to the equivalent of a small town with about 2100 homes. 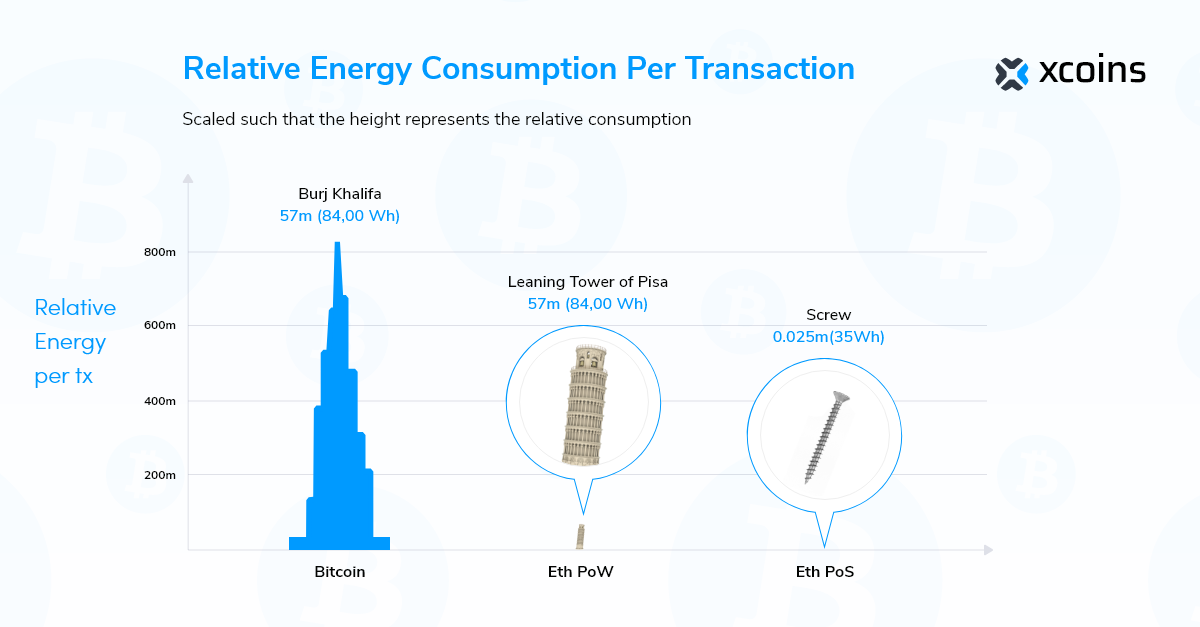 The main criticism of both Bitcoin and Ethereum is the excessive amount of energy used in the proof-of-work (PoW) mining process. PoW is a consensus mechanism that essentially operates by miners competing to propose valid blocks that can be added to the blockchain.

To successfully create a block, miners have to figure out a new winning proof-of-work. Coming up with this proof-of-work, which has to meet the rules outlined by the network, is extremely difficult and miners will only earn Ethereum once they guess the computation that matches the conditions of the protocol. Miners use a process called ‘hashing’ – turning an input into a sequence of letters and numbers – to solve these complex puzzles.

Miners around the world produce trillions of computations every minute and whoever gets to the winning proof-of-work first receives a batch of that cryptocurrency, which typically happens every 10 minutes. The protocol will then create another value for miners to hash and the race begins again.

As you might have guessed, PoW is a complex process so miners require specialised equipment and vast amounts of computational power. For this reason, Ethereum’s current energy consumption is the equivalent to a whole country.

Why staking is more energy efficient

Proof-of-stake (PoS) has emerged as a less power-hungry alternative to PoW. Under this consensus mechanism, there are several entities called validators, who are responsible for choosing the next blocks that are added to the blockchain.

In simple terms, these validators lock up or ‘stake’ some of their ether to participate in the staking process, requiring far less activity than PoW. To be a validator and have a validator node on Ethereum 2.0, you will have to stake 32 ether.

As with PoW where miners are rewarded, so are validators. Ether rewards are given when validators attest to a new block meeting the requirements of the protocol or when they win their own block. However, validators can also be penalised. If they propose a ‘bad’ block, for example, one that has false transactions, part of their staked resources will be slashed and they will face a ban from the network. Penalties are given in other cases as well, such as if a validator goes offline.

But PoS isn’t without its criticisms. As an offshoot of PoW that was created to remedy Bitcoin’s energy draining properties, it’s relatively new so hasn’t been tried and tested as much as PoW.

The future of Ethereum

Beekhuizen makes it clear that the figures used in the blog post are estimates. However, as the spotlight continues to shine on the two crypto frontrunners, this is promising news in addressing concerns about the sustainability of digital assets.

It’s also expected that once further scaling solutions, such as sharding, are in full-swing, energy consumption per-transaction will continue to decrease. There’s no exact date for when the full migration to PoS will happen but as Eth 2.0 upgrades are set to complete in 2022, we expect that it’s not far off.