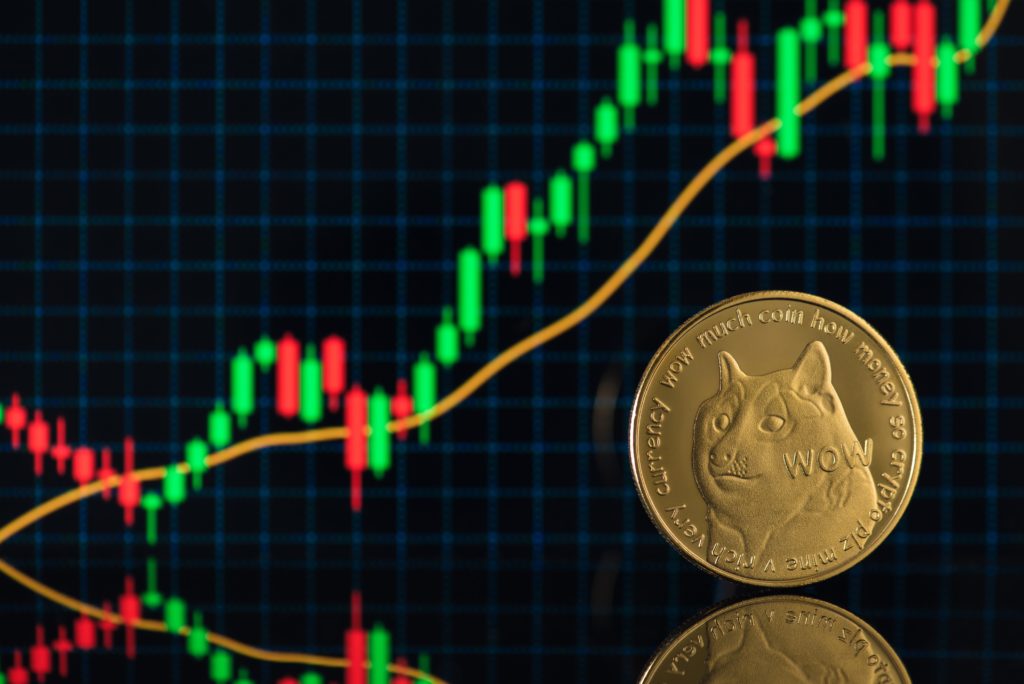 Bitcoin reached the $1000 milestone back in November 2011 and Ethereum in January 2018. They’re undoubtedly the big players, but what about Dogecoin? Can Dogecoin reach $1000?

It’s been around a few years now but has never made it anywhere near that figure. Why not? It’s a popular coin, and has seen impressive growth since its creation in 2013, so why shouldn’t Dogecoin be able to reach similar levels?

Well, as we’ll see, it’s not quite as simple as that.

Dogecoin was developed by software engineers Billy Markus and Jackson Palmer back in 2013.

Based on the Shiba Inu meme, it was originally intended to be nothing more than a joke coin but was soon being considered a serious contender in the cryptocurrency market, thanks in no small part to the Dogecoin twitter musings of billionaires.

Its price remained pretty steady and unremarkable until 2021 when the value suddenly began to soar. Much of this increase has been attributed to a series of Elon Musk Dogecoin tweets as well as his monologue later that year on SNL (Saturday Night Live), in which he endorsed Dogecoin.

To put that in real terms, anyone who bought $1000 worth of Dogecoin in January would have had $120,000 worth of Doge by the end of that five-month period. That’s a growth rate 100 times faster than Bitcoin in the same timeframe.

It hasn’t been all plain sailing, though, as Dogecoin has experienced considerable volatility in recent years. That said, from its humble beginnings, this coin has made some impressive gains since it hit the crypto market.

How high can Dogecoin go?

Many are now wondering if Dogecoin will rise further than its 2021 peak, and if so, just how far it will go.

Some might conclude from its dramatic 2021 price growth that investing in Dogecoin is a no-brainer. Well, not so fast. It’s important to remember that much of that surge was the result of the Elon Musk Dogecoin tweets and his SNL appearance.

The price has dropped significantly since then, and at the time of writing is trading at a more modest $0.14.

Dogecoin came close to hitting the $1 mark in 2021, or at least closer than it ever had done before, so the first question is, will Dogecoin reach $1? It’s certainly possible. It would require a jump in price of more than 670%, which may seem unlikely until you consider the coin’s stratospheric rise in the first half of 2021.

The current market cap for Dogecoin is $16.5 billion, and if its price hits $1 that would rise to $131 billion.

To make it to even a single dollar, the demand for Dogecoin will have to increase. It’s hard to make Dogecoin price predictions, as with any cryptocurrency, but some experts, including Dogecoin founder Billy Markus, think it will make it to $1 at some point.

The chances that Dogecoin will achieve exponential price growth is hampered by its market cap and the way it’s mined.

Unlike Bitcoin, which is limited to 21 million coins, there’s no supply limit for Dogecoin. Every day, 10,000 dogecoins are mined per block compared to 6.25 bitcoins per block. That translates to roughly 14.4 million dogecoins mined on a daily basis.

When Bitcoin’s supply is exhausted, and assuming there’s a corresponding increase in demand, there’s a good chance that prices will continue to rise significantly. The same can’t be said of Dogecoin given its infinite supply.

With Bitcoin vs Dogecoin, there really is no comparison. If Dogecoin were to hit $10 a coin its market cap would be over $1 trillion, more than any other cryptocurrency, including Bitcoin.

So, will Dogecoin reach $10? If Dogecoin enjoys a rally similar to that seen in 2021, it could happen, briefly. However, the stars would have to align once again in Dogecoin’s favour.

Back in 2021, several cryptocurrencies were enjoying price rises. The pandemic was in full swing, with some people stuck at home investing in Dogecoin and other cryptocurrencies for the first time. And of course, there were high-profile endorsements from the likes of billionaires Elon Musk and Mark Cuban.

How high can Dogecoin go, really? Can it reach $100? Well, probably not. The problem yet again is that pesky market cap.

For every $1 increase in Dogecoin’s value, the market cap increases by $180 billion. This means it would end up being more than $18 trillion, slightly less than the GDP of the US, which is $21 trillion, and more than China’s at $15 trillion.

As Dogecoin price predictions go, this one is pretty sound. It’s simply not a realistic prospect for Dogecoin to reach $100. It’s so much money that it’s doubtful whether any cryptocurrency exchange would have the ability to deal with that kind of capacity anyway.

Dogecoin price predictions also need to take into consideration the influence of coin ownership. Currently, there’s a single wallet that holds approximately 23.08% of all the Dogecoin ever mined, worth more than $4 billion at today’s prices, while 50% of the Dogecoin in existence is held in by just 20 wallets.

This could restrict the coin’s growth potential, as people fear that if these wallets were to sell their coins at once it might tank the doge price.

In truth, the question can Dogecoin reach $1000 has already been answered. It’s a fairly definitive no. If it were to rise this high, Dogecoin’s market cap would be roughly $180 trillion, more than twice the GDP of every country in the world, which is around $87 trillion.

Bitcoin and Ethereum are the only cryptocurrencies worth more than $1,000 (Bitcoin considerably more), but as we’ve seen they’re completely different animals in comparison to Dogecoin.

There are a number of reasons for their high value, but supply and demand is probably the main determining factor. The supply of Bitcoin is fixed at 21 million, and while Ethereum doesn’t have an overall cap, its yearly cap is 18 million ETH. Compare that to Dogecoin’s output of 5 billion coins per year.

Looking at Bitcoin vs Dogecoin from an investment perspective, the built-in scarcity of Bitcoin makes it ideal for longer-term investing, or HODLing as it’s known.

Dogecoin doesn’t inspire the same confidence as a long-term store of value. It is the cheaper investment option, though, and has low transaction fees as well as faster transaction times (10x quicker than Bitcoin).

There are good reasons for investing in Dogecoin, and it certainly has growth potential, at least in the short term. However, the chance that it will reach a value of $1000, let alone the numbers seen by Bitcoin and Ethereum, is a practical impossibility.

We’re unlikely to see Dogecoin reach the giddy heights of May 2021 any time soon, but with institutional adoption, an increasing amount of retailers now accepting Dogecoin as payment, as well as big-name endorsements, the future looks bright for this dog-themed coin.

Long-term Dogecoin price predictions vary. Some suggest it could go as high as $0.58 by 2025, while others forecast a more modest $0.19. At some point in the next decade, the chances that Dogecoin will reach the $1 mark are good. Anything beyond that is probably a pipedream.

How to buy Dogecoin

Start investing in Dogecoin quickly and easily at xcoins.com by following the steps below.

Step One: Sign up at xcoins.com if you haven’t already and complete the verification process.

Step Three: Choose the amount of Dogecoin you want and the currency you’d like to buy it in, then select the payment method.

Step Four: Enter your wallet address so we know where to send your Dogecoin.

Step Five: Finally, click “Complete Payment” and your Dogecoin will be with you soon.