Although a rate hike was anticipated, fear and uncertainty continue to swell as economists wait to see if measures are successful in taming inflation.

As a result of the macroeconomic uncertainty, Bitcoin’s price fell back to $20,000 for the first time since December 2020. A move that was echoed by a jump in over-the-counter trading volume.

In line with predictions, the US Central Bank raised interest rates by 0.75% on Wednesday to address the ongoing inflation crisis. The interest rate jump is one of the largest in the past two decades and means that the US benchmark interest rate now stands at 1.50-1.75%.

During the week prior to the interest rate hike, the US Consumer Price Index (CPI) reached a 40-year high of 8.6%. A figure that is far above the Federal Reserve’s target of 2%. Higher interest rate hikes are just one method that the Fed is implementing to try to bring the price of goods and services down.

Although all markets rallied when the Fed’s interest rate hike was confirmed, the initial rally did little to stem the fear that higher rates will have a short-term detrimental impact on the growth of the economy. With risk-on assets suffering the most, crypto markets turned lower heading into the weekend.

Speaking at the FOMC meeting, the Fed Chair, Jerome Powell, said “Clearly, today’s 75 basis point increase is an unusually large one, and I do not expect moves of this size to be common.” However, Powell clarified that another 0.5 or 0.75% hike was likely in July.

From a technical analysis standpoint, $20K has been quoted as a key level of support. When the price broke above the level in December 2020, it signalled the start of the 2021 bull cycle and was a strong precursor to the new all-time high level of $69,000.

However, for new all-time highs to be reached, past cycles have shown that a bearish phase needs to occur. Before each previous bull run, an 85-90% retracement was required.

Many experts believe that it is only through downturns like this that weak investors and weak projects can be flushed out of the ecosystem.

In the past, these 85-90% retracements have not resulted in prices falling below a previous all-time high but, if history repeats, this may indeed happen.

While Bitcoin did drop to a low of $17,500 on Saturday, neither bulls nor bears could distinctively push the price above or drag the price below the $20K mark. The weekly candle eventually closed on Sunday just above $20K at $20,533.

With the price of crypto assets turning lower, trading volume can be a useful data point to see how the market is handling price movements.

A crypto over-the-counter (OTC) trading desk, Cumberland, which is a subsidiary of trading firm, DRW, posted a tweet on Tuesday, Jun 14th explaining how much over-the-counter trading flow had changed over the previous couple of weeks.

“On big swings, more volume tends to come to OTC desks, and yesterday was no exception; it was the most volume we’ve seen so far this year.  In fact, it was 30% more volume than the previous YTD high, May 13th.”

The thread continued to detail that the majority of volumes (75%) were Bitcoin-focused. Ethereum then composed the second highest majority.

Cumberland also noted that the flow ratio suggested that a lot of flow was down to liquidations. The seller-to-buyer ratio stands at 2:1. Although selling has outpaced buyers in recent weeks, which is echoed by the price decline, the insight from Cumberland shows that even with increases in volume, buyers are still very much prevalent within the market. 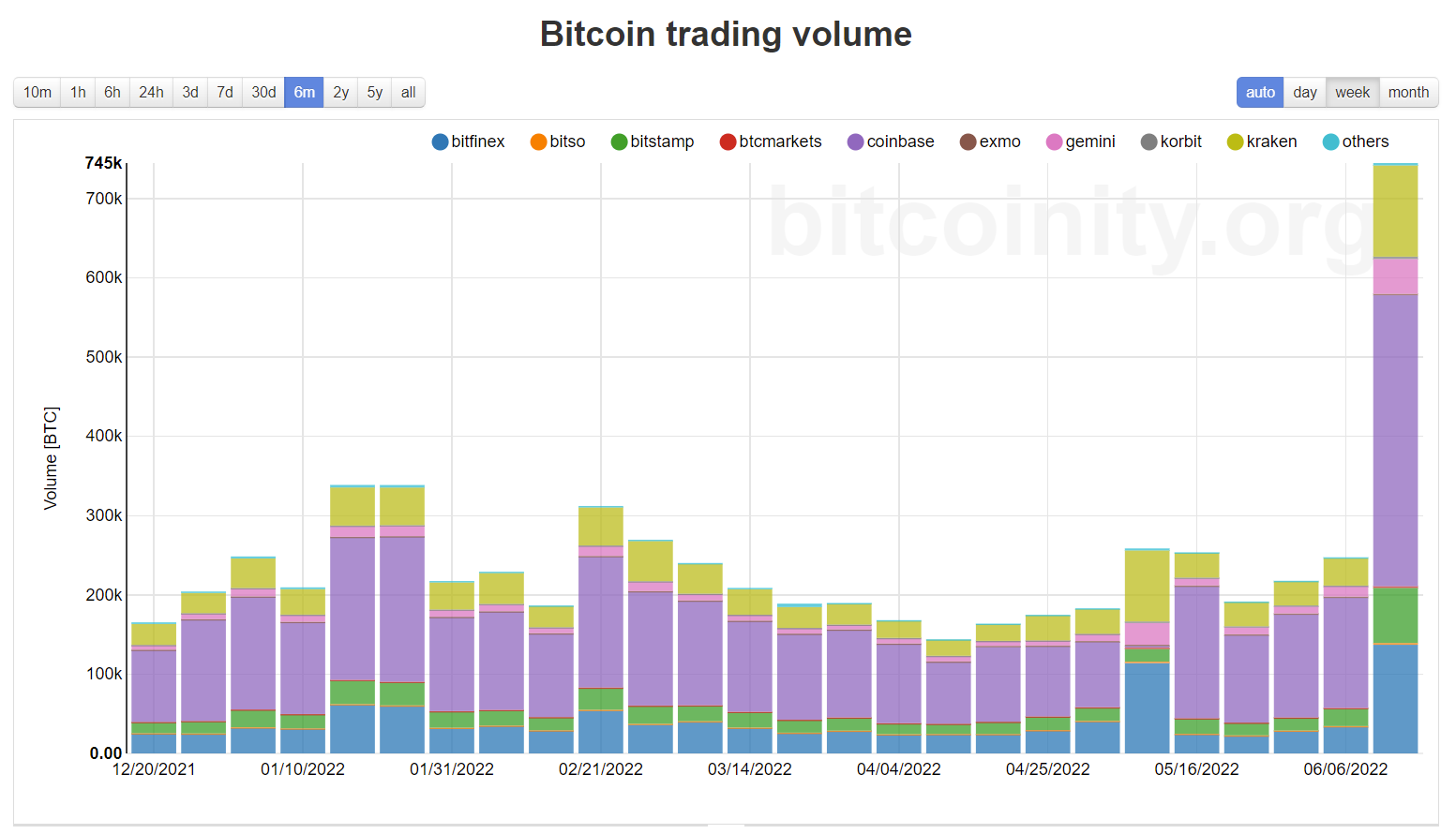 Rumors have been particularly potent as Bitcoin prices continued to fall back towards $20,000 last week, however, Michael Saylor has now set speculators straight.

Back in August 2020, MicroStrategy was one of the first public companies to start purchasing and holding Bitcoin on the company’s balance sheet. Since then, the company has amassed Bitcoin holdings that totalled 129,218 BTC. The largest holdings of any publicly listed company.

However, a MicroStrategy report presented in Q1 2022 detailed that the company had acquired a $205 million bitcoin-backed loan from bank holding company, Silvergate. 19,466 BTC were used as collateral for the loan. This was subsequently quantified by Saylor who stated that the company needed to maintain $410 million in collateral.

With Bitcoin falling to a low of $17,500 last week, Saylor told CNBC, “We can always contribute additional bitcoins to maintain the required loan-to-value ratio.” Saylor then belayed fears by stating that the company’s 115,109 BTC could cover the loan even if the price of BTC dropped to $3,562.